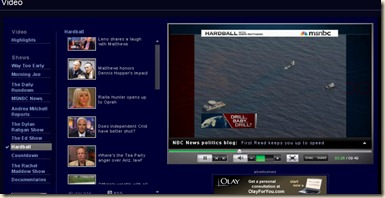 The migration of television channels like MSNBC to the internet illustrates why television will ultimately give way to CompuVision, the fusion of television and the internet. If you compare the interactive format from MSNBC on the internet above to the the linear television format, the latter pales by comparison. In the internet format you pick the shows you want see, then pick the segments that interest you, and finally click an icon to watch the segment in full screen format. You are interrupted by a commercial only when you are switching to another segment and to display ads only when you are selecting shows and segments, not when you're engrossed in watching the segment. It makes so much more sense than watching a whole show, or multiple shows, only a small portion of which you have an interest.

There will come a time when the display market will stand alone and the CompuVision unit you buy will be a combination of the current set top box/DVR and a full blown computer with a wireless keyboard, mouse, and a remote control that will look more like an iPod with touch screen input. This unit will interface with the appropriate modem/router on the input side and the large screen display unit on the output side. Peripherals such as scanners and printers will be wireless and communicate with the CompuVision unit through the router. If sufficiently fast wireless communication can be developed, the display unit could also have built-in wireless. This would completely eliminate cables. Media like DVDs could be eliminated completely with all media being streamed or downloaded over the internet. I hope I'm still around when this happens.

How to see a stock market bubble

This chart will tell you how to detect a bubble in the stock market. It's available at: http://www.bullandbearwise.com/SPEarningsChart.asp
As you see, the real S & P P/E went sky high during the housing bubble. Now it's down to where it was on September 30, 2007. It's still not down to historic norms, so the current bubble is still not completely deflated. If it starts going up again, it's time to get out of the market.
This chart is not be be confused with the annualized P/E chart for the S & P. That one uses old data over the previous year to come up with the P/E so it is late on predicting both the start and end of a bubble. 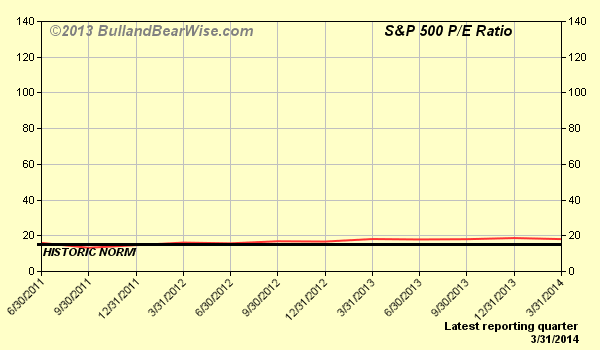 Posted by Elwood Anderson at 10:28 AM No comments: