There is a current debate going on between Paul Krugman, Nobel Laureate of Princeton and the New York Times and Paulina Tcherneva, an economist at New Economic Perspectives (NEP). NEP is run by people from the University of Missouri, Kansas City, and its contributors include people like Bill Black, who put a lot of shysters in jail after the Savings and Loan crisis; Michael Hudson, an economist who has been helping many foreign countries facing austerity crises; and many other from UMKC that are listed at the blog.

Both parties agree that creating money to stimulate the economy can lead to a devaluation of the currency. But, they disagree on whether or not this can lead to a government default and what the the money should be spent on. To date, essentially all the money has been spent on buying junk bonds from banks to increase their reserves so they can ride out the storm, while taxpayers pick up the tab in the form of higher taxes and reduced services later. Little or nothing has been spent on employing idle labor and other productive resources. Both parties have favored stimulus, but Krugman seems more accepting of what has been done than Tcherneva.  She believes the money should have been spent on putting people back to work with government programs. Tcherneva contends that the government will always be able to pay all its bills, including Social Security benefits, because it can print money. It’s just a question of what that money will be worth in purchasing real goods at a later time.

So, the bottom line is, what is the right course in the long run. If we continue to just bail out the banks we’ll have to continue buying  consumer products from overseas. To do so we’ll have to exchange those inflated dollars for the yen or yuan, so they won’t buy as much. But, if we invest now in putting the unemployed to work  restoring our domestic infrastructure and production capacity, later we can produce those goods ourselves and don’t need to take the hit on the currency exchange to buy them from foreign countries. Tcherneva makes the point in a quite wonkish way, but I think she wins the argument.

Posted by Elwood Anderson at 11:02 AM No comments:

The Distorted Picture of Tax Equity

I would like to see a tax analysis organization initiate a project to present a true picture of tax equity which I have been unable to find anywhere.

There is a lot of misunderstanding and controversy over tax policy in this country because people don't have a clear picture of who is paying the taxes and whether or not it comports with their share of income. Most of the interest centers on the income tax, whereas payroll, sales, and property taxes have an equally important role in fairness. If people knew that taxes were being levied fairly and used properly they would more easily see and understand the need for taxes.

What organizations that analyze taxes need to do is present a complete picture of the total taxes people pay vs. their income. Current presentations of this picture use only the income tax and broad categories, the smallest being the top one percentile. Other taxes need to be included and the picture at very high incomes to 0.1 to 0.01 percentile brackets need to be shown.

Tax analysts need to do a better job of presenting a true picture of tax equity if we expect to minimize tax avoidance and prevent tax revolts.

As an example compare the two tables below. The top one is from the Tax Foundation. Looking at the shares of income and taxes you would think people in high tax brackets are overpaying their taxes. But, if you assume that taxes should be paid on net income rather than gross income the picture looks much fairer as shown in the bottom table. In this case it is assumed that it is necessary for a taxpayer to be making at least $33,000, the income of the median return, to hold a job, provide a home, transportation, and other expenses necessary to stay employed. Since other taxes are less progressive than income taxes the picture will appear even less fair if these taxes are included. We need fresh thinking on tax policy.

You may argue about what income it takes stay healthy and hold a job, so $33,000 may not be the right number. But, it’s certainly closer to the truth than the exemptions and deductions we now allow for low income people, while corporations get to deduct their martini lunches and other expenses that could hardly be considered necessary in the normal course of business. If everyone below the median tax return were taken off the tax rolls and all the deductions and exemptions were removed think of the money that could be saved on wheel spinning to avoid taxes. This together with higher taxes on the highest 0.1 percent of earners would go a long way to making up the taxes lost by taking everyone below the median return off the tax rolls. 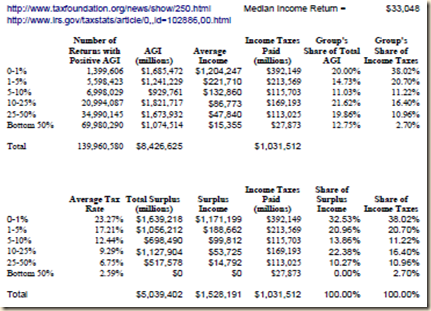 Posted by Elwood Anderson at 11:11 AM No comments: